Home Uncategorized All About Alice

The newest installation of Alice and Wonderland comes in Disney’s second live action film: Alice and Wonderland, through the looking glass.  In this film adaptation of Lewis Carrols work we meet Alice again as she returns to the nonsensical world of Wonderland and must save the mad hatter.

Alice was created and introduced to literature by Charles Lutwidge Dodgson, better known as Lewis Carrol, in 1865 in Alice’s Adventures in Wonderland.  A sequel soon followed in 1871, titled Through the Looking-Glass, and What Alice Found There in 1871.  Dodgson life began in 1832 in Daresbury, England and ended in 1898.  In addition to being a published author, he was a deacon, inventor, logician, mathematician, photographer and poet.

Alice’s Adventures in Wonderland is a dreamlike account of our main characters nonsensical adventures. Alice is in the process of falling asleep while being read to from a book she is not interested in.  Her attention soon focuses on a white rabbit that leads her to falling down the rabbit hole that inevitably takes her to Wonderland.  This new world is nothing like the world she has left and nothing makes sense.  Eating food changes her size, animals talk, mad tea parties ensue and the Queen of Hearts reigns over the land (Holmes).

The curious Alice’s story has been reprinted, adapted and brought to life on screen throughout the years.  The Santa Clarita Public Library circulates many items based on Lewis Carrol’s Wonderland.  Titles that can be found in the library include Easy Readers, Picture Books, Chapter Books, Non-Fiction and Dvds. 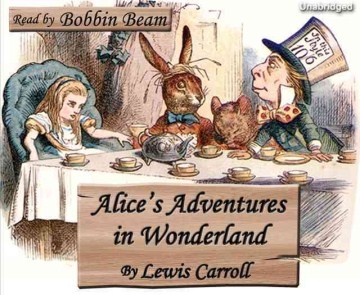